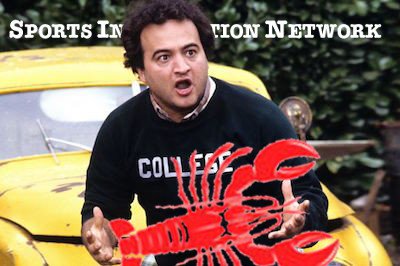 They said it couldn’t be done, but the Sports Information Network is back with another NCAA Bowl tout sure to shock and amaze, with either its huge number of wins or massive amount of pain. Regardless, something will be experienced this holiday season rather than just a dead feeling inside as yet another promising year slips through older fingertips.

Yes, it appears as if the SIN member recap published last week lured the one and only Liam Mahoney out of Tout Retirement to share his skills with the world once again. It truly is a “Christmas Miracle”, as anyone who bought the 2018 CFB picks package will readily confirm (final record 93-64-19).

Last year, a minimum of 40 plays was guaranteed yet over 200 were sent out, so hopefully 2019 has just as many weak lines to pounce on during three weeks of college football insanity. Although no promises are being made that anywhere near 200 will occur again this year, at least it’s clear the internet will be constantly scoured to find soft numbers.

The full three week 2019 Bowl Tout costs $149 USD for anyone never purchasing from us before, with a preferred price for SIN Members of $99 USD. Why do members pay less? Simple: because they’ve already trusted us in the past to provide them with winning sports gambling picks and that trust must be rewarded. Membership has its privileges.

Don’t worry, once a newbie price is paid, membership is received alongside better rates for all future packages. Now it’s understandable why we’re known in the industry as The People’s Touts.

For those not getting rich with us last year, the process is simple. Liam is a professional gambler who treats his craft like a legitimate business, hammering Expected Value (EV) bets throughout the year on multiple sports and leagues. He’s basically The Sportsbook Terminator because he constantly punches bookies in the face, all the while never showing emotion after wins or losses (it’s seriously scary to watch in person, he’s probably a sociopath). 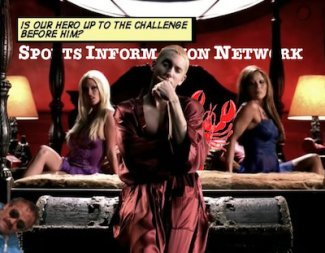 Anyway, Liam has shared his picks with The Network for years and then in 2018 we made him sell them to you, now he’s back for 2019. You’re welcome.

Now, one small bit of sad news (for some) as this will be a Bitcoin only tout because the SIN member who had the Pay Pal account is currently rotting in a $20 hotel room in Central America. Please keep him in your prayers this holiday season.

So to join simply transfer $149 USD ($99 if a member) in Bitcoin equivalent to the cryptocurrency address below, send us a transaction screenshot, and the email address is immediately added to distribution email list.

***Please note that it must be sent in BTC, no other coins accepted.***

We know you’re now very excited with what you’re reading, so we went ahead and left last year’s answers for a few questions in case you have the same ones.

3 types of people. Anyone who…

Well, 40 different Bowl games are happening and we’re guaranteeing a minimum of 40 different picks in total. This means there might not be any plays for certain games, but multiple ones for others.

UPDATE: We’ve sent out 205 plays and closing in on the end of the year. He’s won 59%, just check out these last few picks below, with his full record displayed on the Official Sports Information Network Twitter account for all to see. 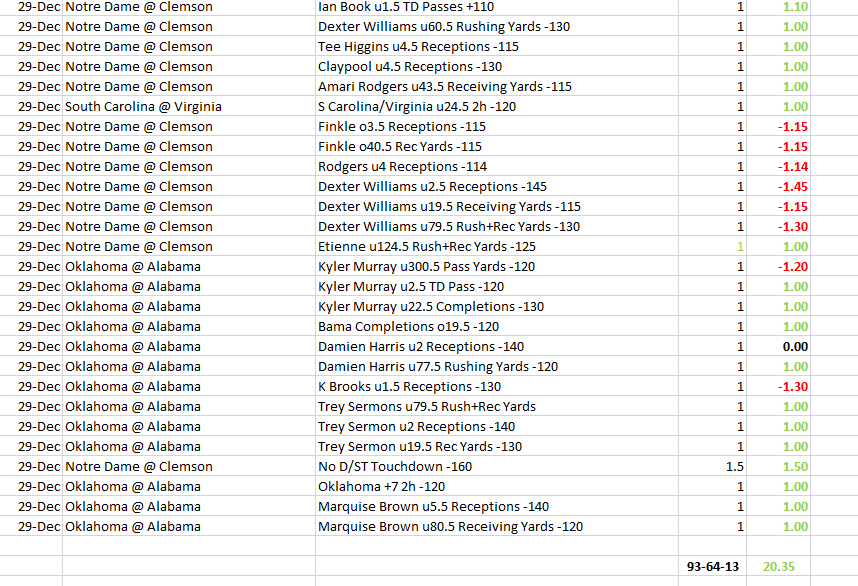 Why aren’t you guaranteeing a pick for every game?

We don’t guarantee plays for every game because there might not be an advantageous wager worth making and we’re not going to force it. It’s impossible to predict spreads, props, and numbers that will be available so we would be foolish to assume we can find decent action on every game.

So are you just going to send out 40 picks and then stop?

Absolutely not. We know from experience that A) people like to know what they’re getting and B) you should always try to under-promise and over-deliver.

So you’re saying that you’re going to send out more than 40 picks.

No, not at all. We’re saying that we expect to send more than 40 plays, hopefully a lot more, but it all depends on what’s out there. We’re not going to be sending out any plays that we won’t be betting ourselves.

Oh ok, you bet the picks first and then send them out?

Yes. Liam bets them and then sends out what his money is on, in addition to what other SIN members staked, if they’re also willing to share.

How will I receive picks?

Liam will be emailing out plays directly to every subscriber, this is the only way to receive them.

When will I receive the picks?

Liam will email picks in real time as he finds them so this will not be like the SIN NFL Tout where plays are regularly sent every morning. He might see something he likes at 8:00am or might not like anything until a few minutes before kickoff.

For this reason, only purchase this package if able to quickly place action when received. You literally might only have a few minutes to get your action in, but we obviously will send them out as soon as we find them. Fortunately it’s 2019 and everyone has a smartphone and mobile-friendly sportsbook.

What types of wagers is he going to be sending out?

Anything and everything. Game lines, half time, quarter bets, player props, in game wagers, anything identified and staked will be sent out.

This tout seems weird – will my friends make fun of me if they find out I bought it?

They might at first, but when you roll up to the playground in a sweet 2008 Audi you bought off of Craigslist with your winnings, YOU will be the last one laughing. Also, your friends are jerks for judging you.

Why are you guys being so transparent with what you’re selling?

Because we are the greatest and most honest touts in the history of touting. Not only has every single one of our touts been amazing (except one), all picks are published afterwards so members enjoy 100% transparency. It’s just how we roll.

The goal of this format is to give Liam the kind of latitude and flexibility to fire plays out when timing ultimately makes sense in relation to information gathered and landscape of marketplace. He’s a professional gambler with many years of experience on both sides of the book and he’s quite confident he’ll find some angles and numbers to exploit.

Also, we might end up selling a partial-Bowl or National Championship package in a few weeks, but no promises. Although, if we do, the relative cost will be much higher than simply buying in the beginning.

IMPORTANT: It always helps to have as many books as possible and for the purposes of Bowl Season we will primarily be targeting MyBookie, Bovada, SportsBetting.ag (sister-site BetOnline), and 5Dimes. Therefore, it’s strongly recommended to register accounts now through links below so you’re up and ready to go when actions commences. Also, you’ll then be officially registered as referred by us, this way, if ever encountering an issue we might be able to help resolve it, depending on the situation.

Liam will not be taking a day off between now and the National Championship because the opportunity to make money during Bowl Season far surpasses yet another overcooked turkey dinner, egg nog hangovers, and well-meaning but overbearing lectures from his mother about when is he gonna settle down and find a “nice girl”. This is one of the biggest gambling months of the year – there’s simply no time to rest.

Have a great holiday season and let’s get after it.

Here’s the text from the 2nd SIN NCAAF Bowl Tout in 2018 and the 1st one by Liam, so let’s all bask in history of Sinning & Winning…

Due to overwhelming demand, we’re very happy to announce the Sports Information Network NCAAF Bowl Tout will return for 2018. Last year we were hugely successful during Bowl Season, giving members lots of extra cash, while we won oodles.

Why are we lowering the price? Simple. We want to sell more packages and spread Christmas Joy, while allowing additional people to smash their local bookies. It’s a hobby of ours.

We strongly prefer payment via cryptocurrency because it’s easy, so just email or DM us on Twitter for an address. For those preferring paper trails and using outdated technology, purchase via PayPal link below with either your PP account or major credit card. All transactions are labelled as “James Miller” so significant others doesn’t give gears.

For full transparency, last year’s SIN NCCAF Bowl Tout was basically a dog’s breakfast of picks, resulting from different members of The Network contributing. However, it was mainly led by Liam Mahoney, Jacques Tannenbaum, and our ex-fearless leader “AG”. This year, it’s spearheaded by Liam, but we’re obviously hoping to get some extra input from the aforementioned individuals, as well as  others lurking in the shadows of Costa Rica, Malta, Gibraltar, and beyond. In short, anything bet ourselves will be sent over the three week extravaganza.

A great debate has raged within the halls of college campuses across the United States for many, many years….Should the players be able to profit off the games in which they play? After all, everyone else is getting a piece of the action so why not them?

Here at the Sports Information Network, we know that the players being paid or not paid, has zero bearing on our ability to make money on their backs.

Like Athletic Directors, Shoe Companies, Apparel Companies, Coaches, Parking Lot Attendants, Food Vendors, Beer Vendors, Cleaning Crews, and Lee Corso we know that there is plenty of profit to be made from NCAA Football so long as you are not the one playing the game.

We finished the regular season with a 50% winning record…..giving us a profit of…..ummmmm… hmmmmm…. Can any of you do math? Let us call that a break even while acting like the media towards the 1968 Heisman Winner. WE WILL IGNORE THE JUICE.

With that said, 50% was light years ahead of what our tout competition accomplished in 2017. As such, the SportsInformationNetwork arrives to salvage what is left of the bankrolls of college football bettors with our never before offered for sale College Bowl Package.

There are many other touts you could turn to for advice. All of them are terrible. DonBest, PreGame, VegasDave, WagerTalk…… Hot garbage compared to the darts that we chuck.

Our college bowl package will feature a play on every bowl (surely this will turn out well), along with proposition wagers should books dare to post them (We fully expect them to post NCAAF Player Props for most, if not all, bowl games)

For the low low (probably too low) price of $119, you’ll get everything listed above. or you can buy only the Big Bowls for $69.

As always, we don’t guarantee winners but we do guarantee to get your heart rate up (anger counts for this metric), so join us for Bowl Season.

You’ll either regret it or you won’t, a 50% guarantee of happiness.