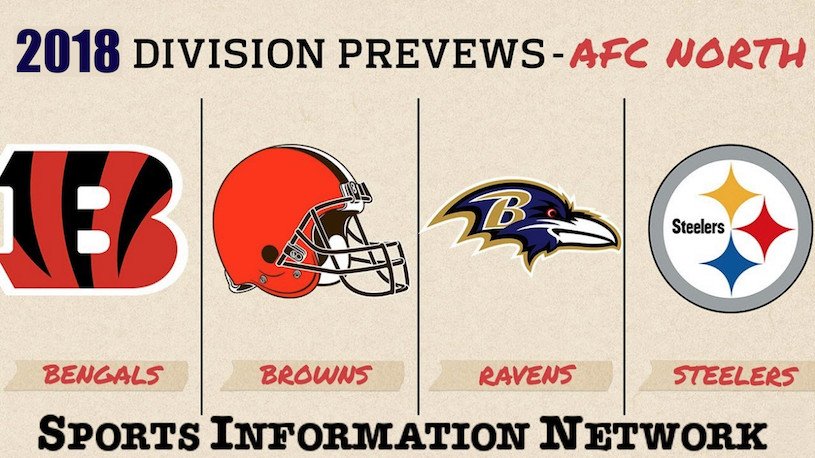 The AFC North unfortunately, is quite easy to predict this year. The Steelers are the clear favorite to run away with the division title (-260 at time of writing). While the Browns and Ravens have some exciting years ahead of them with the addition of rookie QBs this year, I don’t see them offering the Steelers much in the way of competition in the division. The Bengals are an interesting team with great pieces in place, I’m just not sure they have the ability to get on the Steelers level this year.

In seven games the spread is +/- 3 points

Under 8 +120 – While the new WR corps is intriguing it’s just not enough for me to get behind the Ravens winning nine or more games this year. They will stick with Flacco to their detriment in my opinion. Their schedule is slightly easier than most this year so that may be my downfall on this one but I just can’t lay -140 with the Ravens this year.

RB1: Joe Mixon (Gio Bernard will have a role also)

In eight games the spread is +/- 3 points

Over 6.5 -150 – Is Marvin Lewis the leader of the “I should have lost my job years ago” club? Perhaps. However, I think the team will win despite him. Mixon and Gio make a really solid committee in the backfield and Eifert (hope he stays healthy) and Green are comfortable targets for the steady Dalton. The defense kept all but two opponents below 30 points last year, which may not sound like much, but it means that the Bengals will be in the games which is all they’ll need to give them a chance to get to the seven win mark.

Under 5.5 +150 – This under pick isn’t a slight against the Browns, in fact I think they will be a lot of fun to watch this year. There are new faces all over the field for the Browns this year and I’m not sure that translates into instant success. Drawing the NFC south for their non-conference schedule doesn’t do them any favors. Give it a year or two, let Baker learn and take over, let Chubb learn and take over and be the complements to Landry and Gordon and they might be a force instead of a joke.

Favored in 13 games this year

Over 10.5 – I can’t find any reason why the Steelers won’t win 11 games this year. Perhaps the best QB/WR/RB combination in the league means plenty of points scored. The defense held 10 teams to 20 points or less last year. This is one of my favorites this year.