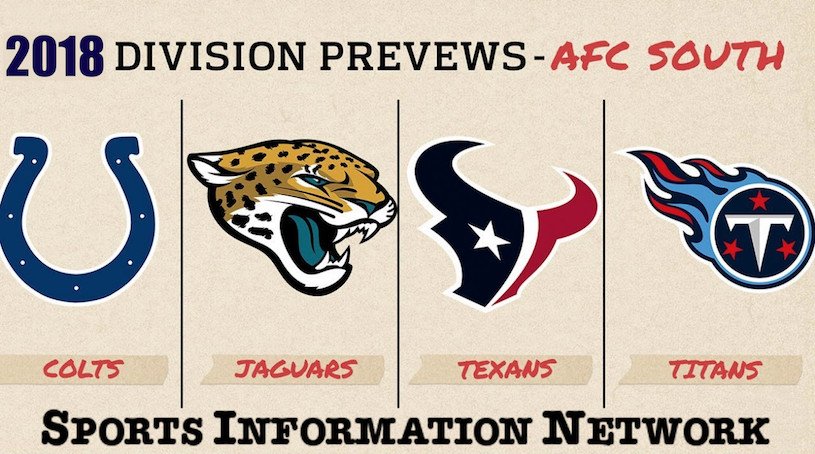 This will be one of the tightest races for the division winner this year. A case can be made for any of the four teams to win the division. The Jags are the favorite (+150 at time of writing) and they certainly have the fire power to win it with their stellar defense and Fournette in the backfield. The Titans and Texans won’t be too far behind though. Mariota is coming in to his own and Taywan is impressing in camp so far. We all saw how exciting Watson/Hopkins/Fuller were to watch last year, that is an offense with a ton of firepower. Lastly, is it so easy to count out Luck? If we take him at his word and he is fully back this year I don’t know if it’s safe to count the Colts out of it.

Non-conference schedule is the NFC east

Under 8.5 +130 – The Texans are coming off a horribly disappointing season last year after only winning four games. Obviously getting Watson back behind center is a huge gain but I don’t think it is enough to lay -150 on them winning 9 games. “Yes, but they have the easiest schedule in the NFL this year!” I know, I know but they are also still only favored in nine games. Let that sink in for a second. The absolute easiest schedule and still only favored in nine games. If they have a key injury or misstep they certainly won’t get over the total. I do think they will continue to put up a lot of points but their defense hasn’t shown that they can stop anyone from scoring; last year they held just three opponents under 20 points (Cle, Ten, Cin).

Andrew Luck back from shoulder injury

Favored in three games; all by 2.5 points or less

Nine games have a spread +/- 3 points

Over 7 -110 – This is a tough one to decide on for me. I’m going with the over because I think Luck can be the deciding factor in many of the close games this year. Plus, I like that they have a new, fresh coaching staff. We really have no idea what to expect from the offense this year now that Pagano and Chudzinski are gone. We do know that Luck is good and their HC just led the Super Bowl champs offense last year. Colts led going into the 4th quarter in 8 of their first eleven games last year and lost five of those 8 games, that’s more on the coaches than the players in my opinion and I look for the Colts to at least hit the .500 mark this year.

Favored in nine games; all nine by a field goal or more

Over 9 -130 – Jax showed us last year that they can get to double digit wins and that was without their WR1. Lee has had an extra year to comfortable and now easily takes the WR1 spot. Moncrief is a solid addition and Bortles has plenty of targets. Fournette showed us what he was capable of last year and should have more positive game scripts coming his way this year. The defense was able to hold 12 of the opponents last year to 24 points or less putting the Jaguars into positions to win games.

Nine games have a spread +/- 3 points

Over 8 -120 – The Titans have found themselves winning 9 games each of the last two seasons and I don’t see any reasons they can’t get to the 9-win mark again. Mariota had a down year last year statistics wise and they still got there. Dion Lewis gives them a burst out of the backfield and their WR corps are serviceable. Last year the defense held opponents to 22 or less points in 10 games. Titans win 10 this year.