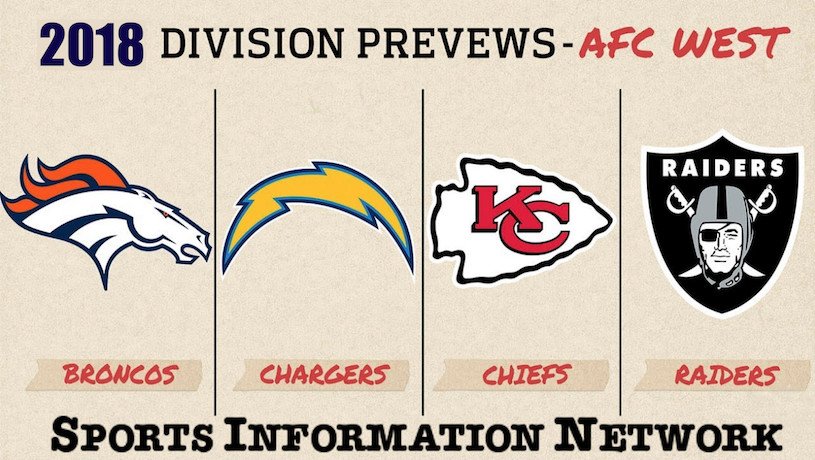 In the AFC West this year we have a three-horse race to the finish line. The Broncos will be the odd team out and the Raiders may quickly fall behind as well if Gruden doesn’t get his coaching decisions into the 21st century. The Chargers are my pick to win the division this year (+125 favorite at time of writing). I think Rivers and Gordon can take this team deep into the playoffs and while the Chiefs will be tough competition, the Chargers just edge them out for the division title.

In six games they are a field goal or worse dog

Under 7 +120 – I think the Broncos will struggle in the run game which will put extra stress on Keenum and the passing game. Sanders is coming off an ankle injury that had him hampered for the latter part of the 2017 season. I do think he and DT are solid, but I just don’t see much beyond them to be excited about on the offense. The defense should be strong, I will be looking to bet their games under the total this year.

Over 8.5 -110 – Taking the over here mostly because if Andy Reid (big if) allows it, this should be one of the most fun offenses to watch this year. Every skill position is loaded with talent and upside. Their defense has several new players at starting positions so unsure how that will play out but I don’t think they have any problems putting points on the board. I think they can win 10 this year.

TE: *Shrug shoulders emoji* (2 TE have torn ACLs this year, rumored to be trying to sign Antonio Gates back, they have Virgil Green but he has most often been used in a blocking role)

Hunter Henry out for the year with torn ACL

Favored in ten games, nine of which are by a field goal or more

Over 9.5 – With the 3rd easiest schedule this year I must go with the over on the Chargers. They have the pieces in place and the only major change at the skill positions is the loss of Henry. They won 9 games last year and it easily could have been 12 with several close losses. I expect them to be in the 12 win range this year and perhaps make a decent run in the playoffs

Favored in seven games; just three by a field goal or more

Over 8 -120 – The Raiders get off to a bit of a rough start being a dog in 4 of the first 5 weeks but I think they come out of those games with 3 wins. They certainly have the offensive weapons in place to put a lot of points on the board but I do worry a little that Gruden is stuck in the past when it comes to current NFL offense, hopefully their talent can outshine any coaching blunders