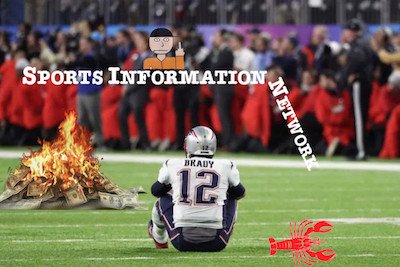 There’s a very simple reason why the New England Patriots lost the Super Bowl to the Philadelphia Eagles this year and I’m surprised no one really seemed to see it coming. Just like young celebrities in the spotlight who get their egos inflated by all of the media attention and praise, Brady and Belichick believed their hype and thought they were unbeatable in this game. I guzzled that Kool Aid as well and was convinced they would simply find a way to win… and boy was I wrong.

The evidence that Belichick’s already massive ego was pumped up to its bursting point was revealed with the benching of Malcolm Butler, who “wasn’t the right match up”, or whatever crap Coach Hoodie spewed out afterwards. I think we can all agree there isn’t another coach in the world who would have benched someone who played 97% of the time during the regular season…and won you a goddam Super Bowl by himself 3 short years ago. (Ok, Seattle pretty much threw the game away, but whatever.) Belichick was obviously drunk from chugging back too much of his own Kool Aid and outsmarted himself with this stupid decision. Che polpetta!

Between the Butler benching, the play calling from the sidelines, and the overall effort put in by many of their players, it’s clear this was a team who thought they were destined to win no matter what happened. It was the perfect storm when they ran into an Eagles team “no one believed in” and who were home underdogs in all of their previous playoff games. It’s absolutely crazy that even after all of this sports karma the Pats still almost put themselves in a position to tie on the last play, (and would have done so if Danny Amendola had properly kept his eyes on the football as it was coming down in the endzone – seriously, go re-watch that play. He could have snagged it.). 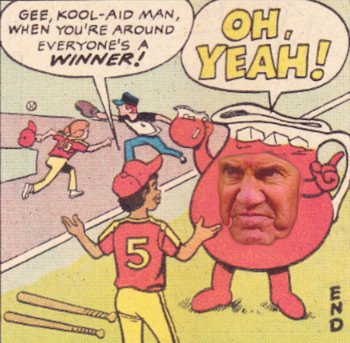 The B&B Connection have heard the mainstream sports media blather on for close to a decade about how each of them is the best ever at their respective jobs, and this year they apparently started to believe them. “Brady is the best quarterback ever, without question”. “Belichick is the greatest coach to ever grace God’s green earth.” Well if you’re already the best ever, why in the hell would you have to go win another championship? To be clear, I don’t think for one second that either of them ever thought this consciously, it was their subconscious that ultimately betrayed them into believing they were ordained by the universe to win at will.

Another reason Brady & Belichick lost is because they fell victim to something that happens to every person in every job everywhere around the world – they just weren’t hungry anymore. This was displayed metaphorically as Brady dropped the ball thrown to him on a trick play, while Nick Foles brought in his gadget ball with poise and appetite.

It happens to everybody. You lose your drive and focus, and in the back of your mind you know you’ve already done enough with your talents. You just don’t care nearly as much about succeeding as you once did. You’ve proved yourself time and time again.

Somehow I unfortunately know a lot of New England Patriots fans, all of whom have grown very smug during this dynasty, (yes it is a legitimate dynasty) – and how did these Pats fans react when they were getting torched after the game on social media? Smugly, of course! They truly didn’t seem to care that they had just lost. Why? Because they just won 5 of the last 15 Super Bowls!! They’re good. Full to the brim with championships. Probably wouldn’t have known what to do with another one. Wouldn’t have bothered to book time off for the parade. Thanks anyway.

Sadly, we at the one and only Sports Information Network ended our season kind of like the Patriots did – we had won and won and won, and it seemed like it would magically continue forever. Could we have done some things differently with the algorithm? Probably not – it’s based on science. Prediction models are grounded in statistics and probability and are therefore never a “sure thing”. Also, it was impossible for an Excel sheet to know neither team would play defense throughout the game.

Thank goodness we had a fantastic winning percentage going in that could absorb a rancid day of plays, ensuring we stayed above the target number of 55% for the 2017 NFL Season. When you buy professional football gambling picks online you want to know they’re coming from a successful organization and SIN has proven we’re winners throughout the course of the year. The system works.

That all said, here’s how we finished weaker than the Vikings’ defense in the NFC Championship. Haters fill your cups…

Special Props: Will Tom Brady wear a bandage on his right hand: No: +100 W

Pink to say ‘Eagles’ before during or after the anthem: No -150 W

How many times will the outside temperature be mentioned? U1 +105 W

So this was obviously a terrible way to end off but anyone with us from the beginning of the year has made great money using our patented algorithms. We’ve always been clear that this system works over time and to ensure the best results you should put money down on every one of our plays – that’s how to take full advantage. But you have to admit it’s kind of funny we saved our worst week for the very end of the year – not “ha ha funny” more like “drink bleach funny”. We’re pissed.

And to continue the SIN tradition of 100% transparency we’re going to state now there’s a very good chance we won’t be selling NFL props again next season. AnonymousGamblr is a bettor first and a tout second, and this year took a lot out of him thanks to endless Tweets, Tweefs, messages, and general chaos of opening up and maintaining a professional tout program (that actually wins). You can rest assured that I will be spending most of the summer on his rocket boat trying to convince him to come back for another year…remember – I get paid in advice so it was nice to actually see gains this year instead of donating the offshore sportsbooks like usually.

We will of course be continuing our paid NBA gambling picks service and I know for a fact that Dick Knotts has been putting pressure on AG and Jacques Tannenbaum to team up for a March Madness tout, so we’ll see where things are at in a few weeks. Our basketball props currently have a winning percentage of 59.7% so there’s still plenty of money to be made before summer. Those of you with $25 burning a hole in your pocket and a desire to keep the degeneracy going throughout the winter should click below to get added to the distribution list and try it out.

Anyway, I hope you enjoyed these recaps and we can do it all over again next year.