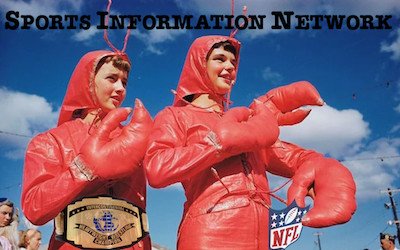 Objects in motion tend to stay in motion, and our winning ways were no exception as they kept chugging along last weekend. Those smart enough to buy NFL picks from us all year continued to make money with a 57% win rate on props, while those new to Sports Information Network expressed surprise and gratitude with how easy it was to beat bookies. We get down on every pick sent out so we were smiling ourselves on Sunday night, (although we were still angry at our drunken decision to buy Trons – worst cryptocurrency ever!)

In fairness, our game line plays only went 2-3, with the London Jaguars bumbling offense ensuring this week’s losing record. It’s sad to see all of the Buffalo Bills fans floating back down to earth after the loss, but if you honestly thought that Tyrod Taylor was leading you to the second round of the NFL Playoffs you’re either crazy or drunk, or both. Too bad there wasn’t a NFC Championship level quarterback in the prime of his career who was available. Oh…wait a minute…

All week the “sports experts” have been predicting that the New England Patriots are simply going to glide into the Super Bowl and then have their way with whomever they happen to be facing that day. Sure they’re a great team but upsets can happen on any given Sunday (or Saturday). You see, they own the Steelers and Blake Bortles will NEVER play in a Super Bowl, so that means the only team that can stop the Pats from going to the Big Game this year is the…Tennessee Titans! 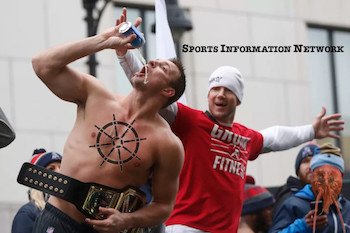 Yes, you read that correctly – the Titans are the only ones who can stop another New England Super Bowl appearance and it might be worth throwing a few bucks down on a moneyline. Bill Belicheck can beat anyone from the NFC with two weeks of preparation time, or the other team will be so scared of him that they’ll simply give them the game , so if the Titans roll over on Saturday you can just hand the Gronk another ring right now and call it a day.

Although…doesn’t it seem like the Patriots are just due for a “shocking playoff loss”? No? Ok, then it’s just me – but you can’t go disrespecting gurus and not have the karma come bite you in the ass somehow.

In the NFC, nobody is giving the Eagles a chance to win at home and I have no idea why. I’m no AnonymousGamblr, but Philadelphia were dominant all season and Nick Foles has looked like a stud on many occasions throughout his short career – I think they have a shot. In the other match up, many people are rooting for Minnesota to be the first team to play for a Super Bowl in their home stadium, but we can all agree that the New Orleans Saints are the sentimental favorites. Drew Brees seems like a great guy and that whole team just came out of nowhere this year, so I’d like to see them win it all.

So the Hammer-Time Playoff Parlay of the Week is: Titans, Eagles, Saints…with an extra side of Bortles if you really like losing money. I know I do!

Please note that I’m terrible when not using SIN picks and I’m wrong about pretty much everything in life. Oh – and parlays are the worst action possible. You’re welcome.

As always, the real winners in professional football are those who end up with more money in their pockets on Monday than they started with on Saturday. Here are all of the picks that were sent out to our members last weekend that you could have had too for $59…

So if wanting to win more than you lose, you only have 3 weeks left to get in. Every one of our members has made gains using the Sports Information Network NFL gambling system this season and there’s no reason why you can’t too.