AG: Is this the future face of sports gambling?

ANONYMOUSGAMBLR IS THE BOLD AND BRASH BETTOR QUÉBEC AND THE SPORTS WORLD DOESN’T KNOW WHAT TO MAKE OF. 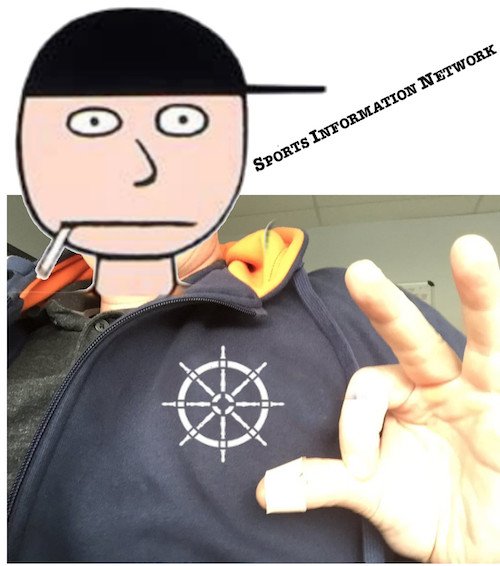 MONTRÉAL — A chubby, pasty kid from the West Coast, by his own account, AnonymousGamblr is also a 39-year-old high school dropout who has emerged as one of the most compelling and controversial, albeit largely unknown, figures in the world of touting.

He wears a lobster bib with white letters that spell ANONYMOUSGAMBLR, and like his personal logo with the missing “e” suggests, this surly doughboy is no ordinary betting man.

Sitting court side at local junior high school games and behind home plate at AA ball games. Canoodling with overweight barmaids at his local watering hole, including a former Miss Rigaud and a former Miss Shawinigan. Sharing photos of himself with inebriants such as expired Rolling Rock beer and skunk weed that not even your uncle Gord would smoke. Never using “gut instinct” to place upwards of $100 on games. Winning and losing hundreds of dollars in what he calls “AG Style.”

In seven days of being shadowed by DICK KNOTTS SPORTS in October and November, AG laid down well over $1,000 on a range of sporting events and spent hundreds more on cheap cigarettes and gross pastries.

He stakes upwards of $350 on NFL Sundays, $100 on MLB and tens and tens of dollars on the NBA, WNBA, tennis, soccer and high school sports — he even blows wads of cash on “smoking hot” seafood which AG refers to as #lobsterlife. (Lobster Life like as in the crustaceans. Get it?) 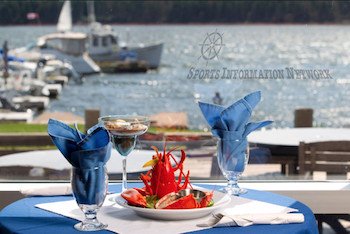 Photos of beautiful dinners populate his Twitter account (@AnonymousGamblr), along with photos of winning screenshots of his online action. He ALWAYS posts losing picks, explaining, “If you have a hot wife, you’re going to show her off, right? If she’s ugly, you show her off twice as much so people know you’re legit and really in love. You know what I’m saying?’’

With photos, videos and text messages to support his story, AnonymousGamblr said he has never gambled with nor formed relationships with any professional athletes who, according to AG, would not want to be associated with him publicly anyway because it could draw unwanted scrutiny. Also, if he did try to promote relationships with celebrities it would make AG look like an attention-seeking, daddy’s boy, trust fund baby screaming for the praise of strangers on the internet. Sad!

However, AG isn’t hiding his ostentatious ways. In fact, with momentum building to legalize the industry outside of Nevada, AG and his inner circle think he could emerge as America’s leading sports bettor as he and the Sports Information Network sell their advice to fans across the country, and the globe.

AG’s introduction to America’s sports gamblers figures to be memorable. A few months ago, for instance, he turned the Touting World upside-down by Tweeting out his LOSING picks, which is unheard of in the industry. He arrived with all the subtlety of a royal flush.

When I first met him he was sporting his Puma track suit, he also wore a red-and-white Walmart hoodie, black New Balance high tops and a watch that his son received in a Happy Meal a few years before. The hoodie cost $12 and the high tops ran around $25, according to A.G., who said he was so drunk when he took his son through the McDonald’s drive through, he couldn’t remember the price of the watch.

So with this visitor in tow, he walked into a neighbouring McCafe, which is a very reasonably-priced coffee house that most McDonald’s have installed on their premises to attract more customers, and asked the cashier how much he thought he paid for the watch. The cashier looked down at the Mayor McCheese-inspired Chinese creation that protruded from AG’s wrist and said, “Ehhh $3?”. AG looked immediately satisfied and nodded at the cashier stating, “very good”. 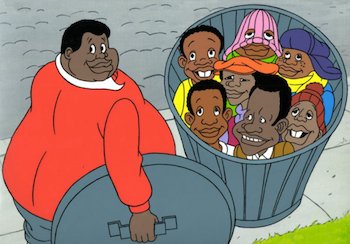 But it’s the aforementioned that’s generating buzz, with his winning picks attracting attention from the likes of pretty much no one in the mainstream media because they’re scared that they will upset their swanky friends in Las Vegas by drawing attention to one of the world’s greatest NFL betting services.

“Imagine if you were writing about this guy who was taking a dump in a public rest room without any toilet paper,’’ longtime confident Jacques Tannenbaum said. “Well, the fact that no one’s writing about AnonymousGamblr means that he hasn’t finished yet. But the story is about two things. How amazing what he’s doing is, right? And number two, when does this end?’’

People have been wondering that for years, according to AG, who has a longstanding history of intentionally defecating in the most vile recesses of truck stops across North America…without checking for TP first.

“Be honest,’’ he recently told “Bobert G.”, poker host at Playground Poker in Kahnawake. “You thought I was going to go broke two years ago.”

Replied Bobert, “I don’t know who the fuk you are, or what the hell you want.

How He Does It

Reclining on a couch in a basement in Laval, Québec monitoring the Winnipeg Jets and Calgary Flames game on Oct 20 which he’d placed $10. (It was DEFINITELY NOT a parlay, as those are the stupidest and least lucrative decisions a person can make, and AG is much, much smarter than that.)

“I can name every (expletive) player on the ice,” AG said. “I can name the coaches, I can name anybody.”

AG cackled as a stoned crony reminded him that he is OVER 60% IN NFL GAME LINE PICKS IN 2017.

“Can you believe we have $10 on this stupid NHL game that nobody’s watching in this world?’’ he continued. “It’s sick, right?” Um…sure??

“People are always like, ‘What’s the secret?’ ” he said. “I’m like, ‘There is no secret.’ It’s hard work. It’s luck. It’s odds. It’s probability. It’s Jacques Tannenbaum. It’s not a magic show. It’s not Doug Henning.”

But on Oct. 20, the night’s success hinged on the NHL teams that AG said he knew EVERYTHING about.

“Oh, I was expecting to lose that one,’’ he mumbled.

AnonymousGamblr then went on to emphatically state that he would NEVER disclose the name of a client, or if he had ever eaten a lobster dinner with a major sports celebrity that he had given winning picks to. To do so would be a violation of trust – trust that could never be regained no matter how hard he tried. Plus he’d look like a complete and utter dipshit. 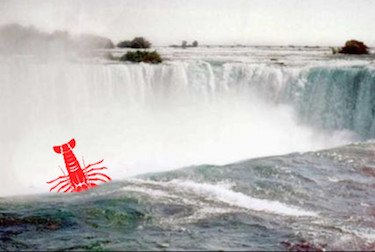 Periodically, AG said, he drives to Niagara Falls, Ontario to drunkenly lose his children’s college funds playing poker, while also doing scouting for a serviceable suicide spot for when his astounding record finally comes crashing down to earth. As evidence, AG showed photos of himself with a skin and bones cocktail waitress with died black hair who looked like a strung-out Shelly Long balancing a tray with 2 empty glasses on it. He also said that he knows several weed dealers and hotel valets across town.

“I’ll go to hotels, hit em’ up for zoomers or screamers,’’ said AG, adding “They’ll always secretly be like, ‘Who are you? Why are you so sad? Where is your family?’

“But it’s like a dark subject, because he’s, like, a dealer and doesn’t want to know his customer’s problems. You know what I’m saying?’’

Because of the sensitive nature of his work, AG said, he refuses to discuss his ties with other valets he said he knows in the Southern Ontario region.

A Niagara Falls Travelodge spokesman had no comment on the situation.

AG claimed he has gambled with several wannabe celebrities and was closest with Charles Hammer, the failed rapper and writer who AG said once sent him $10 by Electronic Money Transfer to get down on games. He said he met Hammer by chance in the backroom of the No. 5 Orange in Vancouver when he was being escorted out for constantly taking his pants off during a lappy, and the two had been friends ever since.

“I used to wake up to my girlfriend texting me good morning and then I’d wake up to Hammer, ‘Do you have the $20 I lent you last night?’ ” AG recalled fondly.

On Twitter, AnonymousGamblr has over 5,000 followers, most of whom are radical conservatives that preach the gospel of Donald Trump and want to “drain the swamp”. Or fill the swamp, as the case may be.

He really has no true fans.

Dave Oancea, better known among experts as the AMAZING “Vegas Dave,’’ is a failed handicapper who sells his picks to subscribers but never publishes his full list of picks to prove his record.

“I tip my hat to AG because at least he puts his money where his mouth is,’’ Oancea said. “But the truth is, when I used to do that, I was down millions.

“I know for a fact AG is fantastic and a much better tout than me. He’s not like someone who’s born into $10 million, and can purchase $200,000 tickets at a sportsbook. That wouldn’t mean you’re good. That just means you have access to funds.’’

Steve Fezzik, a highly regarded sports bettor in Las Vegas, is shocked by AG’s claim of winning 60% to 65% of his action.

Fezzik said the sports betting math works like this: 52.4% is breaking even (because the casinos keep a small percentage of each bet as a service charge known as the vigorish). The return on investment in sports betting doubles at 53.4% and doubles again every percent higher.

The “all-star” winning percentage among sports bettors, Fezzik said, is 55%.

“My experience is that there’s been two guys that win,’’ Fezzik said. “One guy tells me, ‘Colorado State’s quarterback has a hamstring injury and he has not recovered from it, and their leading wide receiver has been suspended.

“Alternatively, I have guys telling me, ‘Colorado State averages only 5.6 yards per play. They give up 5.7 (yards per play), and they face a strength of schedule that’s 255th in the league.’

“In other words, they either know the players very well, or they know the numbers and they’ve crunched all the data very well. The best guys do both. If you don’t do either, you don’t win.”

Fezzik and others claim they’ve never even heard of AnonymousGamblr, but assume that eventually his luck will run out.

He’s not Rainman…or is he?

Regardless, AG said he must maintain his composure to be among the best, which is why he always shows the public his personal action and picks sent out to paid members of his service.

“Anybody can say anything. You need to show the proof.’’

AG relishes proof, such as the dozens of winning weeks of picks published in the SIN Results News Section and on his Twitter page you’ll find homemade illustrations of his picks which look like they were done by a 7 year old child restricted by casts on both arms.

However, the graphics of the picks don’t matter. You need to show the proof.

Bring on the recaps and let the public decide for themselves.

Is there such a thing as Lobster Life? Only time will tell.