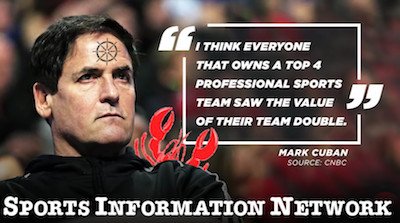 We knew the day would eventually come but we didn’t think it would arrive this soon. Today the Supreme Court of the United States of America freed citizens from coast to coast by making sports betting 100% legal. It’s now up to each individual state to choose if they want to allow their residents the freedom to wager on things like NFL football or the 2020 Olympics in Tokyo.

The process began a few years ago when New Jersey filed a dispute against the 1992 law basically giving Nevada a monopoly by declaring them exempt from federal restrictions on single sport wagering. The three other states given the same exemption? Delaware, Oregon, and the gambling mecca of the west, Montana. A strange list indeed.

Anyway, everyone’s favorite political butter ball Chris Christie led the charge to the Supreme Court arguing the 1992 law was unconstitutional and should be struck down. Today the justices agreed with him, specifically quoting the “anti-commandeering” provision of the U.S. Constitution stating the federal government only has powers granted to it in the document itself. Since nothing discusses gambling, the Feds have zero jurisdiction on this one. Thank you, 10th Amendment!

Consequently, there wasn’t a single legal principle justifying continuing the ban and the vote was 6-3 in favor of repealing it. Christie and the 18 states supporting him were ecstatic they are finally able to open up in their respective jurisdictions, with Butter Ball tweeting out, “A great day for the rights of states and their people to make their own decisions”. Chalk one up for the good guys.

And who were the three old malcontents who didn’t want to turn the country into a sprawling Vegas Strip? That would be Justice Ruth Bader Ginsburg, Justice Sonia Sotomayor, and Justice Stephen Breyer, who probably also don’t like to drink booze, go to amusement parks, or have any fun whatsoever. You guys definitely aren’t invited to the barbecue next time.

Can the 2018 Supreme Court Decision on Sports Gambling Be Overturned?

So what can those who supported a federal ban on sports gambling do now? Well, after SCOTUS has weighed in on a matter it’s pretty much a done deal. Sure individual states can request to be heard on particular matters and appeal, but would it make sense for a state to go through the time and effort when they could simply just keep banning it within its borders? It would be much more cost effective for wet-blanket states wanting to “protect” people from evil to simply ignore the decision and keep it illegal. Job done.

Justice Samuel Alito wrote in the court’s summary that, The legalization of sports gambling requires an important policy choice, but the choice is not ours to make. Congress can regulate sports gambling directly, but if it elects not to do so, each state is free to act on its own. This makes it crystal clear they don’t want anything to do with the matter and is throwing it back to states. Not to mention, that pesky 10th Amendment basically ensures they don’t have the power even if they wanted it. God bless America.

So yes, technically this decision could be overturned in the future but there’s just not a plausible route for it to happen.

Here’s where things really get comical because the professional sports leagues had no idea how to respond to this decision today and no real reaction have been announced as of yet. They haven’t released one decent soundbite on the matter. You would have thought their public relations people would’ve written them something in case this came in, but nope! This version of “no comment” feels different…its almost like they were shocked by the Supreme Court’s ruling today.

There actually seems to be a bit of flip-flopping by some of the leagues, for example the NBA supports gambling on their games, they just want a cut of the action to get their beaks wet. However, they share a lawyer with the NFL and NCAA who’s goal was to keep the federal ban in place, so it’s understandable if you’re starting to lose track of who’s on which side.

The most ironic twist of the day came from the world’s most boring sport, baseball, with MLB releasing a statement of sadness and panic, Our most important priority is protecting the integrity of our games. We will continue to support legislation that creates air-tight coordination and partnerships between the state, the casino operators and the governing bodies in sports toward that goal. Um ok, guys. God forbid someone drops $20 to spice up a Wednesday night Oakland vs. Cincinnati barn-burner. Open your damn eyes.

Now the fun stuff, how can we really profit from the Supreme Court’s ruling placing action on games is legal. For starters, definitely expect tons of weak lines at pretty much every new book launched, so lots of money is to be made. Unless the operator in question is going to buy lines from reputable online sportsbooks employing professional traders for years, there’s going to be a feeding-frenzy of sharps.

For those never witnessing consistent incompetence from a “professional” casino taking action, just ask anyone who plays at provincial lottery corporations in Canada what they’ve seen. Spreads off by multiple points? Yup. Leaving a game on the board too long after an important injury is announced? Only happens every second day. Confusing teams and posting wrong odds? Sure! Just ask those staking the Manchester vs. Manchester City match in Ontario a few weeks ago. (Yes, this actually happened.) Is your mouth starting to water yet? It should be.

Of course, the best way to take advantage oboof SCOTUS’ repeal of the ban is to buy trusted sports gambling picks from a resource that helps identify and abuse the weak lines sure to be posted day-in and day-out. And yes, we obviously suggest purchasing from us, but if not smart enough to do that, at least make sure to buy from an organization publishing their full record every week so you know what you’re getting. Oh, you can’t find another internet tout doing this besides us? Exactly.

The Future of Sports Gambling in the USA

Now that you realize how much free money is going to be floating around once states start accepting single game sports wagers, you’re probably wondering how long it will be allowed to go on for. Surely someone’s awake at the switch at these places, right? Meh, don’t be so sure about that. Many government positions are usually given to friends and family of someone owed favors and not to qualified individuals, so you really won’t have any idea who’s ultimately making lines.

And for anyone thinking offshore sportsbooks are going to become a thing of the past, give your head a good shake. What will every ON-shore operation have to do? Give full reports to government officials detailing everyone winning and how much money they walked away with, of course.

It’s widely known that offshore entities don’t say a word to the U.S. government about anything and that sure as hell ain’t changing, so now they’re going to become even busier due to those who are looking to hide their winnings from the insatiable appetite of Uncle Sam. We are in NO WAY suggesting that you should EVER hide revenues from the U.S. government, but we are realistic enough to admit a few individuals will want to do this.

The other reason they aren’t going anywhere for a while is because they perfected many aspects of their operation. Most have amazing mobile products facilitating getting down quickly, with pretty much every conceivable sport listed. Do you think the North Dakota Online Casino ran by the state is going to have Japanese baseball and Scottish hurling? Ya right.

Lastly, because the competition is so fierce among operators who accept U.S. players, their customer service departments are light years ahead of anything that new online casinos could ever offer. They’ve seen every type of issue imaginable and now have strict policies on how to deal with any situation. They’ve also hired the best agents around who are polite and actually helpful. Can you imagine what it’s going to be like arguing over the way your 7 team NFL parlay was settled with some 18 year old in Lafayette? No thanks.

When you take everything into consideration it’s hard to see offshore operators just sailing off into the sunset forever. They’re simply going to make sure they always extend a better product.

Here’s a quick video from ESPN explaining the finer details of the decision and what it could it mean for sports leagues across the country. Oh, and please don’t forget that ESPN has a HUGE dog in this fight since legalized gambling will lead to big ratings boosts for every game they broadcast, regardless of sport or league.

Not to mention, the hours of content they’re probably already planning to churn out each week. They’ll have turned full-tout by September 1st – just watch. Land based operators aren’t the only ones who are going to make out like a bandit…